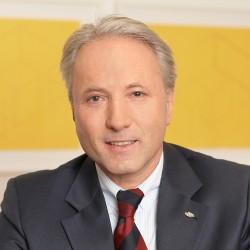 “Culture as the sum of intellectual, philosophical, ethical, and aesthetical achievements is presently seeing a historic progression in the areas of music, acting, opera, and architecture in the city of Salzburg. Thus, in the 21st century, supported by voluntary dedication and sponsorship, it was our call to create a high-quality path to formative art in public space. The discussions that led to this point, the debate over value, and the quality of the artistic works have affected many. In retrospect, I ascertain with gratitude that the gamble was worth it and together we have found enrichment and fulfillment.”