For the fourth Salzburg Art Project, the German painter and sculptor Markus Lüpertz has created a very personal homage to Salzburg’s greatest genius Mozart in the form of a 2.95 m high, polychrome bronze figure. His “Mozart”, though based on a traditional sculptural approach, reflects Lüpertz’s painterly concerns. The site chosen by the artist is Ursulinenplatz, a city square bounded by the cliff of Mönchsberg, Klausentor gate, and the Salzach River. Posed in classical counterpoise on a one-meter-high stone pedestal, the figure confronts Fischer von Erlach’s St. Mark’s Church as a sculptural opposite number that redefines the nature of the space.

Markus Lüpertz’s work combines a female torso and a bust of the composer with the characteristic pigtail. The artist has consciously imbued his “Mozart” with an ambivalence between male and female, force and fragility, constructed and deconstructed, finished and fragmentary. This quality wonderfully evokes the genius, virtuosity and inward discord that marked Mozart’s life and work, adding new aspects to our familiar image of him. Lüpertz’s homage to the composer far transcends the merely figurative. 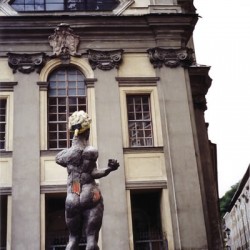 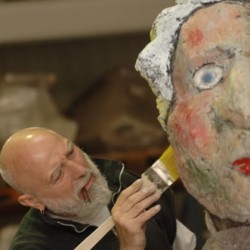 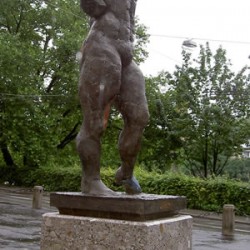 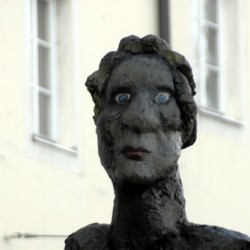 His “Mozart” is neither an historical portrait nor a simple allegory, nor was it intended to be. Rather, as Walter Jürgen Hofmann points out, here “Muse and music may be equally invoked and evoked to explore the frontiers of meaning between which this figurative existence plays with moving charm.” As this implies, the sculpture can be read as a symbol of the art and artist to whom it is dedicated, whose gaze we cannot return because it is lost in reflection at an indeterminable height.