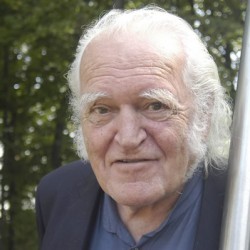 Mario Merz was born on 1 January 1925 in Milan, Italy. He grew up in Turin and studied medicine at the university there for two years. During the Second World War he was an active member of the anti-fascist group Giustizia e Libertà and was arrested in 1945. During this time he created drawings and in the 1950s he painted his first oil pictures. Until the mid-1960s his main field of activity was large-scale painting (processing expressionistic and informal trends). In 1954 his first solo exhibition took place in the Galleria La Bussola in Turin. From the mid-1960s Mario Merz abandoned painting in favour of installations which he created from everyday objects such as bottles, glasses or umbrellas. From 1966 in his works he also made use of neon tubes which served him as an expressive means of energy. In 1967 he became associated with the Arte Povera movement; his artistic colleagues included Alighiero Boetti and Michelangelo Pistoletto. Mario Merz regarded Arte Povera as the link between art and life: real life has to permeate art. Typical of this are the most simple, every day, partly organic materials; the intention is indeed critical of society. From 1968 he created igloos which were later to become his “trademark”; he made them in a variety of materials (steel tubes with slate, glass, wax, brushwood), frequently with neon lighting. The igloo can be understood as an archetypical sign, as an organic and original unity of nature and architecture but also as a symbol of nomadism. In 1968/69 Merz took part in the major exhibitions Arte Povera + Azioni Povere in the arsenals of Amalfi as well as When Attitude becomes Form in the Kunsthalle Berne and in London. From the 1970s he integrated the Fibonacci numbers in his works; they can be understood as a system of order in nature. From the end of the 1970s Merz again referred back to painterly techniques. Since the end of the 1960s Merz has participated in group projects and also had his work shown in solo exhibitions, primarily in major international galleries and art associations as well as in large museums including the Kunsthalle Basel in 1975, the Whitechapel Art Gallery London in 1980, the Moderna Museet Stockholm in 1983, a retrospective in the Guggenheim Museum in New York in 1989. In the years 1972, 1977, 1983 and 1992 Mario Merz participated in the documenta 5-7 and 9. In 2003 the Japan Art Association awarded Merz the “Nobel Prize” among art prizes, the Praemium Imperiale for sculpture. Mario Merz died on 9 November 2003 at the age of 78.