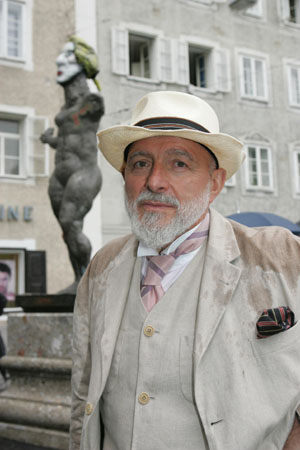 Markus Lüpertz was born on 25 April 1941 in Liberec, Bohemia. In 1948 the family fled to Rheydt in the Rhineland. From 1956-1961 he studied at the School of Art and Graphic Design in Krefeld and at the Academy of Art in Düsseldorf. He has been a freelance artist since 1961. In 1962 he moved to Berlin and embarked on “dithyrambic painting”. In 1968 he had his first exhibition hosted by Michael Werner in Berlin and since then Michael Werner has organised annual exhibitions in Cologne. In 1970 Lüpertz began working on German motifs. From 1976-1987 he was professor at the State Academy of Fine Arts in Karlsruhe. In 1977 he began working on his style pictures; in 1982 he took part in the documenta 7 in Kassel. In 1983 Lüpertz was professor at the Salzburg Summer Academy of Fine Art; in 1985 he began his analysis of themes from antiquity. In 1986 he was appointed professor at the State Academy of Art in Düsseldorf and since 1988 he has been its vice-chancellor. In 1991 a retrospective of Lüpertz’s work from 1963 to 1990 was presented in the Museo Nacional, Centro de Arte Reina Sofia, Madrid. In 1993 a survey of his work (paintings, sculptures, drawings) was exhibited in the Kunstmuseum in Bonn; the first pictures from the series Men without Women – Parsifal were also created in this period. In 1996 a thematic presentation of his works was given in the art collection of North-Rhine Westphalia, Düsseldorf, with an accompanying symposium. In 1997 there was an extensive exhibition of paintings in the Stedelijk Museum, Amsterdam; in 1998 an exhibition of sculptures in the Lowe Gallery, Atlanta. In 2001 Lüpertz designed the circular mural The Six Virtues in the entrance area of the Federal Chancellery in Berlin with the bronze sculpture The Philosopher in the Foyer. In 2002 his works were presented at the IVAM Centre Julio González, Valencia and at the Museum Würth, Künzelsau. 2004 he received the IVth International Prize „Julio González“ and exhibited at the Tasende Gallery, West Hollywood/La Jolla. 2005 Markus Lüpertz was presented at the Galerie am Lindenplatz, Vaduz, at the Galería Colón, Bilbao and at the Galleri Bo Bjerggaard, Copenhagen. 2006 he had a common show with Rosemarie Trockel at the MKM Museum Küppersmühle für Moderne Kunst, Duisburg. In 2007 his sculpture „Mercurius“ has been installed at the head office of Deutsche Post AG in Bonn. Markus Lüpertz is the author of volumes of poetry and has designed several stage sets. He lives and works in Berlin, Düsseldorf and Karlsruhe.