Insideout for two vocal soloists and ensemble, re: Connection by Manfred Wakolbinger 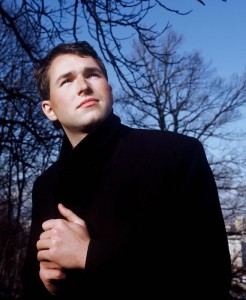 Vito Žuraj (*1979) studied composition with Marko Mihevc in Ljubljana, with Lothar Voigtländer in Dresden and with Wolfgang Rihm in Karlsruhe. During the 2009/10 season, he was a fellow of the International Ensemble Modern Academy, in 2011 he participated in the IEMA Composition Seminar, and from 2010 to 2012 he held a scholarship from the Akademie Musiktheater heute of the Deutsche Bank Foundation. He has cooperated with the Ensemble Modern, Ensemble Recherche, Talea Ensemble, Theatre Bielefeld, the Experimental Studio of the SWR, the RIAS Chamber Choir, the RSO Stuttgart and the Frankfurt Radio Symphony Orchestra, among others. Performances of his works have taken place at Frankfurter Positionen 2013, Milano Musica 2012, Royaumont 2011, Acanthes 2010, Movement Saarbrücken 2009/10, Heidelberger Frühling 2008, and the Takefu Festival 2007 in Japan. He won a first prize at the 57th Composer’s Competition of the State Capital of Stuttgart in 2012, an Encouragement Award of the Art Mentor Foundation Lucerne in 2010, the Orchestra Prize of the German Radio Philharmonie Saarbrücken in 2009 and a project stipend of the Hanne Darboven Foundation in 2009. Vito Žuraj teaches instrumentation and Gregorian chant at the Music Academy in Karlsruhe. The release of his portrait CD by the German Music Council in cooperation with the label WERGO is in preparation.