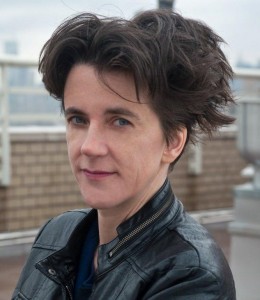 Olga Neuwirth (*1968) studied composition at the Conservatory of Music and painting and film at the Art College in San Francisco. In Vienna, she continued her studies at the Academy for Music and Performing Arts as well as at the Electro-Acoustic Institute. She received essential impulses from encounters with Adriana Hölszky, Tristan Murail and Luigi Nono. In 1991 Olga Neuwirth came to broader international attention with her two miniature operas based on texts by Elfriede Jelinek.

In 1998, two portrait concerts as part of the series “Next Generation” at the Salzburg Festival were dedicated to her; during the following year, her first evening-length musical theatre work Bählamms Fest, based on a libretto by Nobel Prize Winner Elfriede Jelinek adapting a work by Leonora Carrington, was first performed at the Wiener Festwochen. Her work Clinamen/Nodus, written for Pierre Boulez and the London Symphony Orchestra, was taken on a worldwide tour after its London world premiere in 2000.

In 2002 she was composer in residence at the Lucerne Festival, where she also programmed a remix of her music by DJ Spooky – long before this became common practice. In 2003 her musical theatre work Lost Highway, based on David Lynch’s film of the same name, had its world premiere, and the new production at the English National Opera at the Young Vic was awarded the “South Bank Show Award” in 2009.

Since her teenage years, Neuwirth has been interested in science, architecture, literature, film and visual arts, and thus cross-genre thinking was never foreign to her from the very beginning of her career. Therefore, she has initiated numerous collaborations with artists from other genres. Because of her early works including music and video, she is considered a pioneer of this practice in the so-called “New Music” scene. From these multiple interests arose various sound installations as well as theatre and film scores created between 2002 and 2006 – an invitation to participate in documenta 12 in Kassel crowned these efforts. The special method of this composer, who has always refused to accept aesthetic demarcation lines, is also characterised by the fact from an early stage, she focused on integrating “sounds” of other genres into her personal musical idiom. In 2006 and 2009 she wrote two solo concerti: a Trumpet Concerto for Håkan Hardenberger and a Viola Concerto for Antoine Tamestit.