As a sequel to the successful 10-year „Walk of Modern Art“ project, the Salzburg Foundation has just unveiled three new sculptures by Anthony Cragg as part of the newly-launched „Krauthügel Art Project“. Scheduled to run for five years, this new venture is to stage a temporary outdoor exhibition each year beneath Hohensalzburg Castle, across some 80,000 sq.m. of green public
space.“ 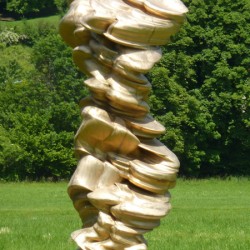 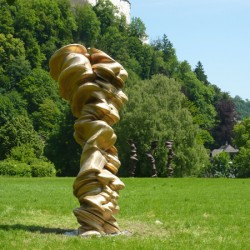 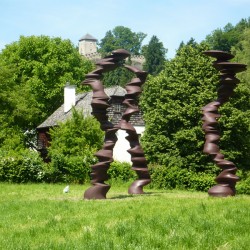 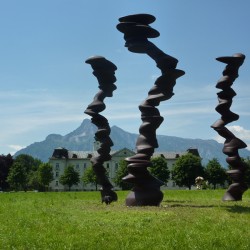 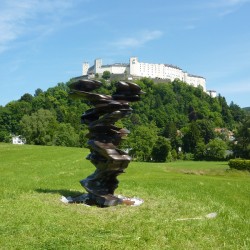 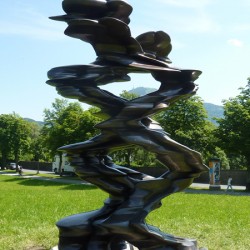 In close collaboration with the Archabbey of St. Peter, the President of the Salzburg Foundation, Karl Gollegger, and its Artistic Director Walter Smerling have struck a corresponding agreement for the next five years, and are delighted at the response of the artist Anthony Cragg, who has fashioned three new bronze sculptures especially for Salzburg: „Points of View“, „Runner“ und „Mixed Feelings“.

On Friday, June 6, at 11.00 am, the exhibition “Anthony Cragg – Three New Sculptures” was inaugurated on Salzburg’s Krauthügel beneath Hohensalzburg Castle in the presence of the artist, the President of the Salzburg Foundation, Karl Gollegger, the Chairman of the Foundation for Art and Culture, Walter Smerling, Archabbot Korbinian Birnbacher and Provincial Governor Wilfried Haslauer.

The presentation also marks a premiere for the artist Anthony Cragg, as hitherto none of his works have been shown on the Krauthügel. He was, however, immediately taken by the site, as he outlines in his explanation of the inspiration behind his sculptures:

Runner, according to the artist, „expresses the feeling you have at the moment you think you know what is happening, whilst, at the same time, also suspecting that things are about to veer off in the wrong direction. This applies frequently not only to the minor, personal things, but also to major movements and trends which you generally sense happening around you.“ Runner (2013) measures are 360 x 251 x 146 cm, and weighs in at 2.5 tonnes.

Mixed Feelings portrays Cragg’s gamut of emotions. „The positives consist of a large number of positive and negative outcomes which unite to form an apparent view. Put simply – fusion and confusion“. Mixed Feelings (2012) measures 550 x 236 x 224 cm and weighs just over 4 tonnes. The presentation of Three New Sculptures marks the second collaboration between the English sculptor and the Salzburg Foundation in the city of Salzburg. Back in 2008, his work „Caldera“, the seventh sculpture to be featured in the „Walk of Modern Art“ project, was unveiled on theMakartplatz. Since 2013 the art work has been in the possession of the Würth-Gruppe and been donated to the general public and the city of Salzburg as a loan.

Anthony Cragg was born in Liverpool in 1949, and after completing his studies moved to Germany. Since the late 1970s, he has been domiciled in Wuppertal, where in 2006 the sculptor acquired an overgrown park, measuring some 15 hectares, together with the listed Waldfrieden Villa, which he developed into the Waldfrieden Sculpture Park. Opened in September 2008, the Sculpture Park now houses works by Anthony Cragg himself, and also stages travelling exhibitions featuring other internationally-acclaimed sculptors.

A winner of the distinguished Turner Prize, the artist was awarded the Praemium Imperiale for Sculpture in 2007. Since 1979 he has been teaching at the Düsseldorf Academy of Art, where in 1988 he was appointed professor, before moving to Berlin to take up the post of Professor of Sculpture at Berlin’s University of the Arts in 2001. Since 1994 he has been a member of the Royal Academy of Arts, London, and since 2002 a member of Berlin’s Academy of the Arts. In the same year he was also appointed Commander of the British Empire (CBE). He has served as Deputy Vice-Chancellor and since 2009 as Vice-Chancellor of the Düsseldorf Academy of Art, following in the footsteps of his predecessor Markus Lüpertz. On August 1, 2013 he was succeeded by Rita McBride. In 2009 Anthony Cragg was elected member of the North Rhine-Westphalian Academy of Sciences, Humanities and the Arts.